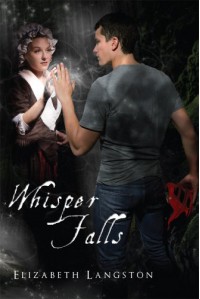 Eighteenth century Susanna is an indentured servant whose master is cruel and miserly;  corporal punishment and scant portions are the norm.  Twenty-first century Mark has made it a habit to bring food with him to their meetings.

I wouldn’t go to the falls empty-handed. Susanna was getting protein bars. The Whole Foods store was crazy on Monday, as if everyone on this side of Raleigh had stopped in for heat-and-serve vegan meals. I walked past the deli and headed to the section devoted to energy bars. I liked to keep a stash on hand for those times when my parents forgot to get food I liked while grocery shopping. After today, Susanna would have a stash, too.

It was hard to know what she would like. Not peanut butter or chocolate. They might be too intense. Fruit might be good. Strawberry, apricot, or fig? I got all three. She could toss them if she didn’t like them.

After checking out, I walked out to the bike rack and stowed the stuff in my pack. As I was preparing to unlock the bike, I noticed a SALE sign on my mom’s favorite store, Meredith Ridge Books. A bookstore— where people bought novels. The devil’s missives. Oh, yeah. Tonight, Susanna would have food and fiction. [Susanna can read, but even if she had time, the household doesn't allow novels.]

. . . I skimmed the titles, hoping for inspiration. It was a bust. Susanna wasn’t likely to appreciate demons, cheerleaders, or zombies. . . . [a clerk steps in and offers suggestions]

“Jane Austen? We have new copies, plus a few antique volumes.”

I felt like smacking my head. “Perfect. Thanks.” I waited to survey my options until the woman wandered away. The bookcase had six shelves, one for each Austen title. There were dozens of copies of each book, organized from newest to most beat-up. I read the blurbs. Persuasion won.

[he purchases the book, a used leather-bound copy (the clerk approves), and he takes his power bars and the book to the Waterfall.  Susanna isn't there yet.]

I found a fallen log to sit on with a clear view of the falls. Two minutes passed— two minutes of nothing occupying my attention except kamikaze mosquitoes and decaying leaves. Okay, I was bored.

I flipped open Persuasion and turned to the first page. The first sentence was incredibly long, one hundred words or more, with commas and semi-colons all over the place. English teachers today had to be upset over that sentence. I read on. Jane Austen might’ve put a lot of words in the first sentence, but those words were doing their job. The dad was a total jerk.